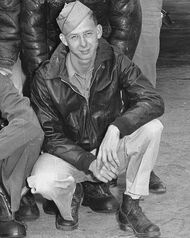 MIA - 10 September 1956
RB-50G Superfortress #47-133 departed Yokota Air Base, Japan, on September 10, 1956, on a
secretive HAYSTACK communications intel reconnaissance mission to the vicinity of North Korea. It was this aircraft's inaugural reconnaissance flight with Russian and Korean linguistic specialists aboard. After the plane failed to respond to radio calls, a search was started. Numerous aircraft and ships searched the Sea of Japan, but was called off after eight days, due in part to rough seas from typhoon Emma in the vicinity. No evidence of the plane or the sixteen crew members aboard was ever located. The flight had gone missing. The Air Force declared that the aircraft was lost on a weather reconnaissance flight in the typhoon, but documents released in 1992 showed that it was in fact on a secret mission. Rumor has persisted for years that this air crew were downed by interceptor fighter aircraft of either the Russian or North Korean air forces, but no evidence to that has been learned.